Thank you for your participation in our online Public Scoping Meeting for the proposed South Bay Connect Project! The entire session should take no more than 15 minutes to complete. We look forward to reviewing your input and continuing to work with you throughout the Project.

Sign-in so we know you attended. By doing so, you will also be added to the project contact list for future updates.

Thank you! Thank you to those who participated in our live chat. Comments can be submitted in multiple ways until 5 p.m. PST on August 13, 2020.


Three Ways to Navigate This Meeting

Click the arrows on the right side of your screen.

Use the navigation bar to the left of your screen to revisit any part of the meeting.

Use circles at top below the project title to revisit any part of the meeting.

Capitol Corridor Joint Powers Authority (CCJPA) and its partner agencies have begun preliminary design and environmental analysis on the South Bay Connect Project. The South Bay Connect project would create a shorter, more direct connection between Oakland and San Jose by relocating Capitol Corridor passenger rail service between the Oakland Coliseum and Newark from the Union Pacific Railroad (UPRR) Niles Subdivision to the UPRR Coast Subdivision. This relocation is expected to facilitate improved separation of passenger and freight rail operations in southern Alameda County and create new connections for transbay travelers between the East Bay and destinations on the Peninsula.

The Capitol Corridor offers Northern California travelers a more reliable intercity passenger rail alternative to traveling on congested corridors such as Interstates 80, 680 and 880.

This rail improvement project has been identified in several planning documents as a critical component to enhancing both passenger and freight rail operations:


South Bay Connect aims to improve operations for both uses of rail in supporting the economic vitality of the Northern California Megaregion. Improvements to the rail infrastructure may also be included in the project to accommodate the shift of rail services.

South Bay Connect includes a proposed new station in Fremont that will provide a much-needed intermodal transbay connection between the East Bay and Peninsula.

Explore the interactive map above.


South Bay Connect can provide many benefits to Capitol Corridor travelers and the larger Northern California megaregional economy and environment, including:

Support economic vitality by permitting enhanced rail movement and the preservation of freight rail capacity in the Northern California market through the reduction of conflicts between freight rail operations and passenger rail service.

Promote environmental sustainability by reducing greenhouse gas emissions as a result of potential transit ridership increase due to offering a shorter, more direct travel option with new transbay connections. A shift from cars to transit could lower vehicle miles traveled on area freeways and reduce emissions.

Ardenwood at State Route 84 and the Coast Subdivision tracks

Hayward at State Route 92 and the Coast Subdivision tracks

Based on established criteria, Ardenwood was identified as the most feasible station location to serve communities and to create seamless connections with transbay bus routes. A detailed station design will be developed through project planning.

The proposed new service route and station alternatives will be analyzed in a California Environmental Quality Act (CEQA) Environmental Impact Report (EIR). The EIR will assess potential environmental impacts of the project on the physical, human and natural environment.

To identify potential impacts and establish clear mitigations, the environmental analysis will look at a wide range of resource areas including:

Key activities during the environmental planning include close coordination with regulatory agencies including, but not limited to:


Measures to avoid, minimize, and mitigate any potential adverse impacts will be identified in the EIR. A Draft EIR will be prepared and made available for public comment. Comments will be addressed in the Final EIR, which will be approved by the Capitol Corridor Joint Powers Board, the governing entity of CCJPA.

Along with these key input milestones, CCJPA will proactively communicate and engage the public throughout the planning of South Bay Connect.

Explore the steps of the CEQA process below. Please note: While the interested public will be engaged throughout the CEQA process, the yellow highlighted steps represent the formal Public Comment periods.


While the proposed project will analyze the full suite of environmental issues, a couple of potential areas stand out.

The relocation would result in discontinuing Capitol Corridor service at existing stations in the Cities of Fremont and Hayward.

While the new route will include at least one new station location, the change in location will impact riders.

Moving Capitol Corridor passenger rail services to the Coast Subdivision would separate it from a significant amount of freight rail traffic and improve operations for both uses of the railroad. However, this change is expected to impact hours of rail operation along the existing route on Niles Subdivision, as well as increase in trains on the Coast Subdivision, which could impact adjacent property owners, residents and the traveling public at road/rail crossings.

CCJPA will be analyzing potential impacts as a result of the project around the existing and proposed future routes. These impacts and any identified mitigation measures will be highlighted within the draft environmental document. 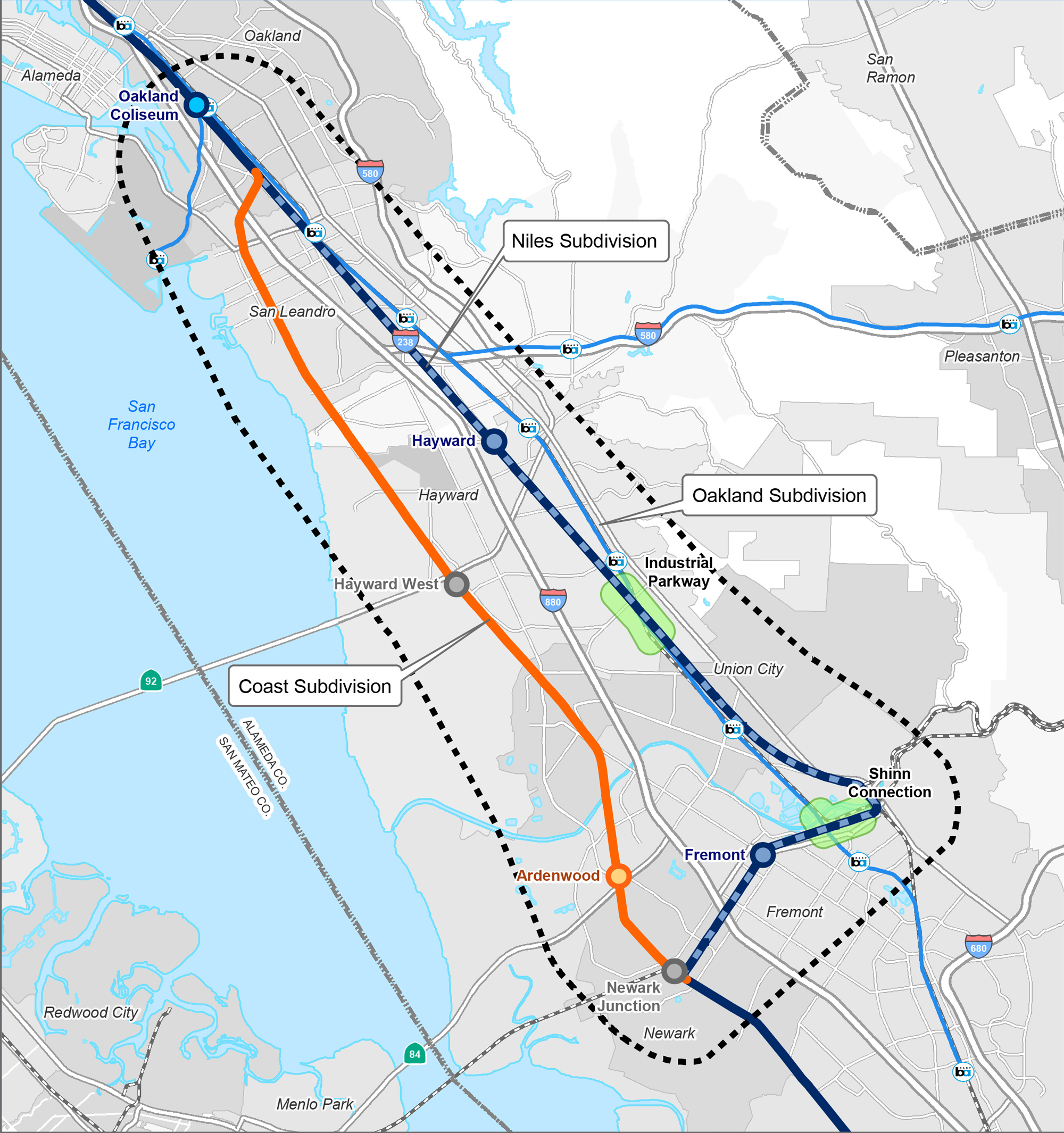 A 45-day scoping comment period has been established for the project between June 29 and August 13, 2020. During this time, interested parties are asked to review project information through this online public meeting forum as well as the project website and provide comments.

Comments can be submitted through a number of ways.

All comments concerning the proposed environmental scope of the project are to be submitted by 5 p.m. Pacific Time on August 13, 2020 via the following options:


Project Resources and Next Steps

Thank you for your interest and input in the South Bay Connect project. All input received during the Public Scoping Period will be shared with the project team to support project development.

We are interested in your feedback on the environmental issues, potential alternatives and mitigation measures for the proposed project. If you haven’t already submitted a comment, please do so by clicking the comment button in the top right corner of your screen, typing a question or comment in the area provided, and hitting submit. We appreciate your input!